Studying in South Africa as an African - Part 1

My name is Anne (with an E), I have been in the South African higher education system for about 7 years now. I started my undergraduate journey in South Africa in 2013 and continued up until Masters level. The purpose of this blog series will be to impart some of my knowledge, which I think will be beneficial for anyone that wants to pursue studies in South Africa. Being an international student is not easy and can be so overwhelming! From the application process, hassles of attaining a study visa, the finance issues, the culture and language barriers! Wow, it’s A LOT!  Lucky for you, the purpose of this blog is to share some of my vast knowledge through my own stories and those from other people. Therefore, if decide you to study in South Africa you will know exactly what you getting yourself into (see, I got you!). In this edition I will start off with very general information and as the weeks proceed, I will deal with more specific issues.

For this first post, I will get into reasons to choose to study in South Africa. I will discuss the university rankings, the geographical distribution and the type of programs offered at the four top universities in the country. I hope you will enjoy it!

South Africa is known to most African people as the land of “greener pastures.” Africans have migrated to South Africa in search of a better life than the one that can be afforded in their home countries. As an African, South Africa is an attractive choice of study because four of the country’s universities are ranked top in the continent. This is according to the Times Higher Education university rankings which rates university performance using indicators such as research, research output, innovation, international outlook and teaching.  South Africa leads with 3 (University of Cape Town, Witwatersrand and Stellenbosch and University of KwaZulu-Natal) in the top four.

Table of the 10 South African universities showing the African and world rankings as of 2020 (source: Times Higher Education Univerity Rankings) 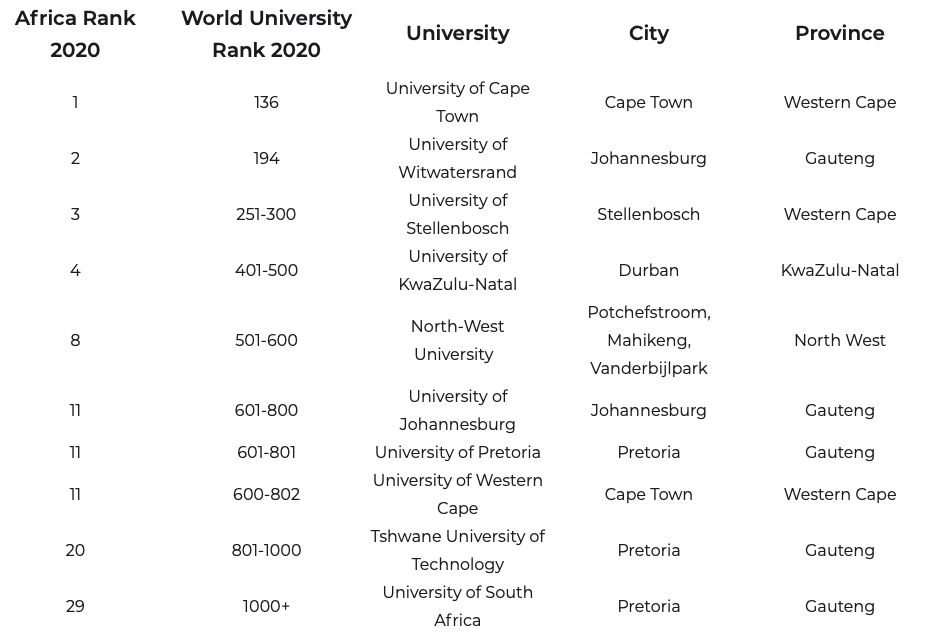 Breakdown of the top 4 Universities in South Africa

Located in the Western Cape Province, this university was founded in 1829 and is the oldest university in the country and the second oldest in Africa behind the University of Sierra Leone. The University is the best rated in Africa because the researchers continue to help with the creation of African-based solutions to global problems, including issues relating to climate change, urbanisation, safety and security, education and health. The National Research Foundation (NRF) allocates ratings based on a researcher’s recent research outputs and impact, as perceived by international peer reviewers. In 2018, UCT recorded the highest number of NRF-rated researchers in South Africa: 541 of UCT’s academic staff are rated by the NRF.  As of 2018, 15% of South Africa’s top rated scholars are at the UCT and are recognised as world leaders in their respective fields.

The university academic departments are Built Environment, Health Sciences, Commerce, Humanities Science and Law. Apart from the academics, studying at the University of Cape Town also offers more. The city offers lovely metropoltian lifestyle with the night life, resturants and shopping complexes. The university is located at the foot of the spectacular Table Mountain and in the same city as Robben Island (where Nelson Mandela was imprisoned).

The university is located in the province where most of the world’s gold is found. The university was founded as a mining university but has grown to host various departments. There are five faculties: Commerce, Engineering and Built Environment, Health Science, Law and Management, Science and Humanities.  Some really cool factors that can draw you to study at Wits is located in the same city as the biggest shopping mall in Africa “Mall of Africa” or Sandton City.  Secondly, this is the entertainment hub of the country as most big concerts  by local and international acts are hosted in Johanneburg- you can run into some local celebrities.

University of Stelenbosch is recognised as a leading tertiary institutions based on research output, student pass rates and rated scientists. After UCT, the university has the second-highest number of scientists in South Africa who have been rated by the National Research Foundation (NRF). As a result, Stellies, boasts the highest weighted research output per full-time academic staff member of all South African universities and also has the highest student success rate in the country.

Students can complete assignments and exams in both English and Afrikaans, even though the main language of instruction is Afrikaans. For postgraduate students, the language in classes is determined by the demographics of the class and is usually English. The university is split into 4 campuses but the main campus is in Stellenbosch. There are ten faculties: AgriSciences, Arts and Social Sciences, Economics and Management Sciences, Education, Engineering, Law, Medicine and Health Sciences, Military Science, Science and Theology. The university town maintains Dutch colonial architecture, and streets host an array of cafes, boutiques and galleries. There are an array of wine vineyards that one can explore.

UKZN was formed in 2004 with a merger of the University of Durban-Westville and the University of Natal and now hosts four campuses. The draw factor is that, University of KwaZulu-Natal is a top-ranked state-funded university in the country for research productivity. The following subjects are Agriculture, Life Science, Physical Sciences, Arts and Humanities, Computer Science, Engineering and Technology, Psychology, Social Science, Law and Management, Health Sciences and Education. A factor that could make you choose studying at UKZN is because it is located near the the beaches of the Indian Ocean in Durban with an array of tourist destinations.

Stay tuned for my next post where I will be discussing the type of documents required for the application process including study visa requirements. The study visa is an extremely important document that will be needed if you intend to be registered at any university in South Africa and I will get more into that next time.  I’ll leave you with links that I think are very helpful if you want to find out more about the universities I discussed and others.