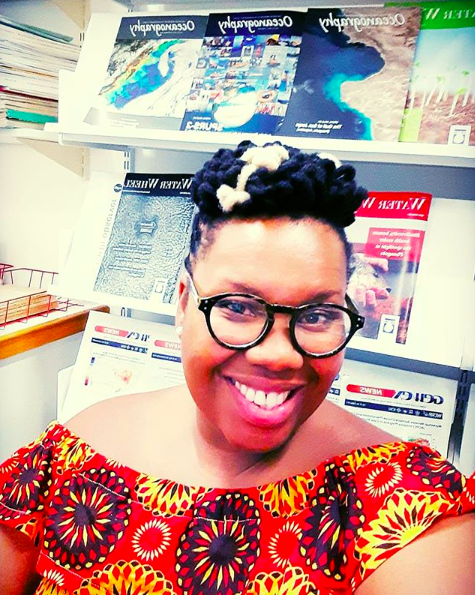 I have a BScBiological Sciences and Honours Botany, both from Walter Sisulu University in Mthatha, South Africa my hometown. In my MSc Botany at the University of Cape Town, my research characterized the molecular taxonomy and biogeography of nitrogen fixing bacteria that form symbiosis with fynbos legumes.

I’m currently a PhD candidate in the Department of Oceanography at the University of Cape Town. My PhD research is part of a growing body of work that critically examines biogeochemical cycling in the ocean, particularly regions that are currently under-sampled. With the use of nitrogen isotopes I study the microbe nutrient interactions within the Indian and Southern Ocean waters. I additionally scrutinize ocean uptake rates within these waters.

My parents influenced me to become who I am today. I grew up in a household where education and science were part of our lifestyle even though our parents were not scientists. I don’t remember a time when I didn’t one day aim to be a scientist. Moreover, we had a culture of watching science shows together and that without fail groomed and molded me to aspire to be a scientist one day.

Microaggression from white professionals in the STEM circles has to be the most infuriating aspect I have come across as an African in STEM. Especially in instances where they violently do this in subtle ways, pretending to be helpful or kind. Being undermined for being a black woman in the sciences is another challenge which I decided to turn into a strength as soon as I identified it at the beginning of my postgraduate journey. Nowadays I can say I enjoy observing those who initially undermine me as a black woman in STEM.

Growing up in a predominantly black background helped me realize that even if I'm black in any space I can do just as good or even better than everyone surrounding me. My background has made me identify flaws and gaps in how we communicate science. This is exactly what led me to an advocate for science communication. In fact, when I started communicating science in a way that everyone can understand I had no idea that it had a term and description. I was just doing it to make everyone aware of what it is exactly that scientists do in my diverse fields of study. My upbringing also made me believe that I could be as successful as anyone else and become one of the faces of science while influencing and modelling to others what a scientist can be and look like. When I was growing up, I never saw any black women scientists and knew that there was something terribly wrong with that picture. Thank you to how I was brought up I decided that I had to be one of those few and multiplying black women faces in STEM.

Giving more opportunities to Africans and making sure that the spaces where we conduct our STEM projects are welcoming for all races and individuals from all backgrounds, comfortable for everyone’s progress and financially beneficial for all,especially people from disadvantaged backgrounds like myself.

Believe in yourself! Do not wait for someone else to tell you that it's possible, make it possible because you can. Never give up on what you want!!!

I run Women In Science Hub (www.womeninsciencehub.com), a women in STEM blog that also highlights my own journey in academia.